While browsing the Accordance Forums, a perennially helpful and worthwhile series of discussion boards dedicated to the workings of Accordance Bible Software, I noticed an interesting post which included the following:

I am listening this afternoon to a debate between Dr. Bart Ehrman and Dr. James White from Jan 2009. Dr. White claims that even the most "extreme" traditions (such as the Westcott-Hort manuscript vs the Textus Receptus) agree in 95% of the variants, that we can be confident in 95% of the text of the New Testament. Dr. White said in his talk that "you can do a search with Bibleworks" that proves his point.

Similar comparative capabilities are available in Accordance, and within seconds (thanks to the extreme ease of the program's powerful interface) I was looking at a complete list of discrepancies between the editions mentioned above. Some were simply matters of punctuation or capitalization between the electronic texts, but many others were more substantive. However, I'm not particularly interested in an investigation of the accuracy of White's claims. Instead I was reminded of an article by Helmut Koester in which he argued that the most fluid period in the life of any text is the first century after its composition--and of course, we have virtually no New Testament manuscripts which belong to this category (the exceptions being a few fragmentary papyri). Matthew J. Bruccoli explores a modern illustration of this point in his collation of a number of variants in early printings of Sinclair Lewis' Babbitt, all of which appeared mere months after the novel's initial publication in September 1922: 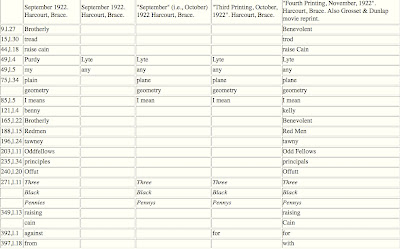 It's certainly something worth thinking about...
Posted by Matthew Burgess at 2:25 AM