A summary treatment of the principal contexts and themes of Paul's Letter to the Galatians:

He'll be here next week:

The Department of Classics of the University of Virginia is pleased to
announce that Paul Cartledge, A. G. Leventis Professor of Greek Culture at
the University of Cambridge, will be giving a lecture entitled Herodotus
and The West.

The lecture will take place at 5 pm on Tuesday, 31 March 2009, in the Gibson
Room, Cocke Hall. A reception will follow.

One of the world's leading experts on the history of Ancient Greece,
especially Sparta, Professor Cartledge is the author of numerous books,
including The Greeks: Crucible of a Civilization, The Spartans: An Epic
History, Sparta and Lakonia, Alexander the Great: The Hunt for a New Past,
Thermopylae: The Battle That Changed the World, and Agesilaos and the Crisis
of Sparta, and he is the editor of the The Cambridge Illustrated History of
Ancient Greece. Not only a first-rate scholar, he has also devoted much
energy to communicating his work to a wider audience, serving frequently as
consultant to the BBC and Britain's Channel Four. 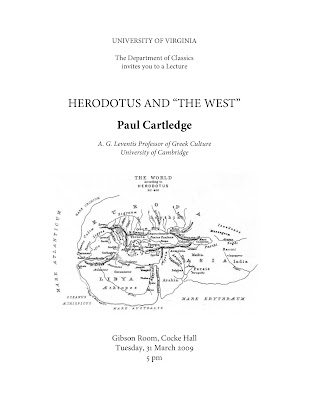 Posted by Matthew Burgess at 6:29 PM No comments:

Thanks to Nick Norelli for posting transcripts of two recent debates between Bart Ehrman and James White and William Lane Craig concerning the textual stability of the New Testament and historical evidence for the resurrection, respectively. I don't know when I'll get the chance to read these in full, but hopefully I can spare a few minutes this weekend. A brief glance at the Ehrman/White exchange piqued my interest... although I suspect that neither will win any new converts, as their partisans are pretty polarized. Check these out if you get a chance!

William Lane Craig vs. Bart D. Ehrman — Is There Historical Evidence for the Resurrection of Jesus?
Posted by Matthew Burgess at 6:21 PM 2 comments:

Discounts on more recent releases and forthcoming titles, including the second volume of Joel Marcus' commentary on Mark, and the fourth volume of John Meier's A Marginal Jew series.

From the Commentary Series

A Biblical masterpiece and a seminal contribution to Christian theology, FIRST CORINTHIANS was written by St. Paul to the congregation at Corinth in response to a letter asking him for clarification of some of his teachings. In it, Paul discusses the basic tenets of Christian faith, including the Lord's Supper and the Resurrection, and addresses questions about marriage, celibacy, and other down-to-earth matters of moral conduct and Christian living. It also contains Paul's memorable definition of Christian love. With Fitzmyer's masterful, completely up-to-date commentary, FIRST CORINTHIANS is an important addition to the Anchor Bible series.

Paul's Epistle to the church at Philippi has long stood out as his most joyful letter. It is addressed to his favorite congregation, the converts who were his most devoted followers. At a time when Paul lacked the support of most of the other churches he founded, the Christians at Philippi sent him financial gifts and even an "apostle" of their own, Epaphroditus, to aid him in his mission and comfort him during his imprisonment. In appreciation, Paul offered them praise and support, encouraging them to pursue a creative theology (in 2:6-11) and to seek greater maturity in their faith in the face of considerable civic opposition and threats from Hellenistic ideologies. For centuries, PHILIPPIANS was thought to be a single letter written by Paul when he was imprisoned in Rome. In recent years, however, Reumann and other scholars have come to the consensus that it is actually three separate letters, two of which were written from a prison in Epheus. Reumann discusses in the introduction why he reached this conclusion, and goes on to provide a translation and commentary that will stand as the definitive study of this important Epistle for decades to come.

From the Reference Library

In this provocative, intelligent, and highly original addition to the Anchor Yale Bible Reference Library, Susan R. Garrett argues that angel talk has never been merely about angels. Rather, from ancient times until the present, talk about angels has served as a vehicle for reflection on other fundamental life questions, including the nature of God?s presence and intervention in the world, the existence and meaning of evil, and the fate of humans after death. In No Ordinary Angel, Garrett examines how biblical and other ancient authors addressed such questions through their portrayals of angels. She compares the ancient angel talk to popular depictions of angels today and considers how the ancient and modern portraits of angels relate to Christian claims about Jesus. No Ordinary Angel offers important insights into the development of angelology, the origins of Christology, and popular Western spirituality ranging from fundamentalist to New Age. In doing so, it provokes stimulating theological reflection on key existential questions.
Pre-Publication Announcements

In the final nine chapters of the Gospel of Mark, Jesus increasingly struggles with his disciples? incomprehension of his unique concept of suffering messiahship and with the opposition of the religious leaders of his day. The Gospel recounts the events that led to Jesus? arrest, trial, and crucifixion by the Roman authorities, concluding with an enigmatic ending in which Jesus? resurrection is announced but not displayed. In this volume New Testament scholar Joel Marcus offers a new translation of Mark 8?16 as well as extensive commentary and notes. He situates the narrative within the context of first-century Palestine and the larger Greco-Roman world; within the political context of the Jewish revolt against the Romans (66?73 C.E.); and within the religious context of the early church?s sometimes rancorous engagement with Judaism, pagan religion, and its own internal problems. For religious scholars, pastors, and interested lay people alike, the book provides an accessible and enlightening window on the second of the canonical Gospels.

John Meier's previous volumes in the acclaimed series A Marginal Jew are founded upon the notion that while solid historical information about Jesus is quite limited, people of different faiths can nevertheless arrive at a consensus on fundamental historical facts of his life. In this eagerly anticipated fourth volume in the series, Meier approaches a fresh topic the teachings of the historical Jesus concerning Mosaic Law and morality with the same rigor, thoroughness, accuracy, and insightfulness on display in his earlier works. After correcting misconceptions about Mosaic Law in Jesus' time, this volume addresses the teachings of Jesus on major legal topics like divorce, oaths, the Sabbath, purity rules, and the various love commandments in the Gospels. What emerges from Meier's research is a profile of a complicated first-century Palestinian Jew who, far from seeking to abolish the Law, was deeply engaged in debates about its observance. Only by embracing this portrait of the historical Jesus grappling with questions of the Torah do we avoid the common mistake of constructing Christian moral theology under the guise of studying 'Jesus and the Law,' the author concludes.