Highlights from the most recent Review of Biblical Literature:

Craig A. Evans and Emanuel Tov, eds.
Exploring the Origins of the Bible: Canon Formation in Historical, Literary, and Theological Perspective
Reviewed by Everett Ferguson

Travis L. Frampton
Spinoza and the Rise of Historical Criticism of the Bible
Reviewed by Seán P. Kealy

John Goldingay
The Message of Isaiah 40-55: A Literary-Theological Commentary
Reviewed by Francis Landy

Robert P. Gordon, ed.
The God of Israel
Reviewed by Bruce A. Power

Daniel M. Gurtner and John Nolland, eds.
Built upon the Rock: Studies in the Gospel of Matthew
Reviewed by J. Christopher Edwards

Justin K. Hardin
Galatians and the Imperial Cult: A Critical Analysis of the First-Century Social Context of Paul's Letter
Reviewed by Wilhelm Pratscher

Mikeal C. Parsons
Body and Character in Luke and Acts: The Subversion of Physiognomy in Early Christianity
Reviewed by Glenn E. Snyder

David T. Sugimoto
Female Figurines with a Disk from the Southern Levant and the Formation of Monotheism
Reviewed by Aren Maeir

This May Have Upset the LDS, But It Made My Day

Chris Heard and Doug Chaplin both point to an unfortunate error in Brigham Young University's student newspaper, which referred to a group of Mormon leaders (known as the “Quorum of Twelve Apostles”) as the “Quorum of Twelve Apostates.” I understand why some folks might be upset, and the paper was quite right to issue a prompt clarification and apology, but it appears to be an honest misspelling rather than a blatant attack, and therefore is pretty hilarious. ;-)

Doug also mentions a few other especially amusing newspaper errors; I won't give them here so as to prolong the suspense while you head over to his blog to check them out.
Posted by Matthew Burgess at 4:52 PM No comments:

Over on the always-fascinating Evangelical Textual Criticism, Michael Bird has posted a nice summary of Martin Hengel's views on the transmission of the gospels in the second century, as well as some brief responses. Check them out.
Posted by Matthew Burgess at 4:41 PM No comments:

The Departments of Classics and History of the University of Virginia are
pleased to announce that Pantelis Nigdelis, of the Aristotle University of
Thessaloniki, will be giving a lecture entitled "The Institution of Ephebeia
in Roman Macedonia: A Particular Kind of Ephebeia?"

The lecture will take place at 3 pm on Friday, 10 April 2009, in the Gibson
Room, Cocke Hall. A reception will follow.

Professor Nigdelis has written numerous books and articles on Greek history,
especially on the epigraphy of Macedonia and the interaction of Greek and
Roman cultures in the area.

Posted by Matthew Burgess at 7:42 PM No comments:

Over on Biblical Studies and Technological Tools, Mark Hoffman has posted detailed and abbreviated summaries of his comparisons of various Greek New Testament editions using the Accordance, BibleWorks, and Logos software packages, and also the Open Scriptures Manuscript Comparator available online (about which I blogged briefly here). A brief recap of his extremely useful findings (check them out for yourself if you have any interest in these topics; they're required reading):

Each program has its strengths and weaknesses. Manuscript Comparator does the best job of displaying differences, but it lacks the NA27, and results cannot be saved. Accordance does a good job of display and creates useful lists of differences, but only two texts at a time can be compared. BibleWorks has the most versatility, but it is difficult to save results. Logos has the most texts available for comparison and results export easily, but one must get accustomed to the way it displays differences.

* If you don't have any of the Bible software packages, Manuscript Comparator will achieve most of the the results you need.
* If you do own one of the programs, my best advice is to familiarize yourself with the text comparison implementation in that package.
* If you are looking to buy a Bible software program, the text comparison tools will probably not be a deciding factor, but the descriptions I provide here should make you aware of what is possible with each.

I am a long-standing and enthusiastic user of Accordance, but I have occasionally been frustrated by its inability to compare more than two manuscripts or versions at a time. In addition to the tools which Mark mentions, I might also recommend Juxta, a free program which I discovered through my seminar on textual criticism with Prof. David Vander Meulen. It does not yet feature extensive support for non-Roman alphabets, but it allows the user to compare more than two texts at a time and also to quickly and easily collate and create an apparatus for a selected group of texts. Here's a screenshot of a comparison of Romans 5:1-2 between the Westcott-Hort and Nestle-Aland versions (including their punctuation): 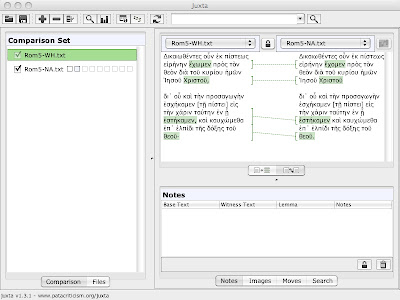 I'm planning to use Juxta in a current project involving the earliest witnesses to the Gospel of Mark... I'll be sure to report my results.

Also, one minor note of clarification: at the beginning of his post, Mark mentions that a recent blog post of mine inspired by the debate between Bart Ehrman and James White "notes that the reliability of the Greek New Testament is at least 95% even between between the two most extreme text versions (Textus Receptus vs. Westcott & Hort." As I indicated in my post, that statistic is not mine; it was given by James White, and I have not evaluated it. Mark, however, conducted a statistical analysis (via Logos) that indicated a 93.4 percent agreement between the two, and I'm perfectly happy to accept that judgment. ;-)
Posted by Matthew Burgess at 5:54 PM 5 comments: