New Tomb of Egyptian Noblewoman Uncovered
Archaeologists have uncovered the tomb of an Egyptian noblewoman in Saqqara, 15 miles south of Cairo. The stone coffin is from the 27th dynasty and is part of the royal burial grounds.

Ireland’s Earliest Breweries?
Two Irish archaeologists have proposed that the horseshoe-shaped, grass-covered mounds found throughout Ireland were in fact used for brewing beer, not for cooking as previously thought. The analysis has been rather tasty.

Returning Art
The Getty Museum’s return of several artifacts to Italy is a major international case, one that may set a precedent for other countries.

Math in Translation
A new book gives English translations of significant mathematical theories from the non-Western world in historical and mathematical context.

Mesopotamian Revivalism through Art
Iraqi artists in Baghdad have been hired to paint over the concrete slabs throughout the city with images of former kings and mythical scenes from pre-Islamic history.
Posted by Matthew Burgess at 7:31 PM No comments:

New: Severson on the Parable of the Sheep and Goats 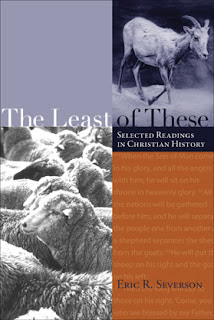 This collection of primary documents from Christian history—all dealing with the interpretation of the Parable of the Sheep and Goats in Matthew—spans the second to eighteenth centuries.

“A unique and brilliant contribution to theological pedagogy.”
—Robert Cummings Neville, author of Behind the Masks of God

Request Review or Exam Copy
Posted by Matthew Burgess at 7:20 PM No comments:

A few highlights from this week's Review of Biblical Literature. I was pleased to see that Jouette Bassler's Navigating Paul (which I used while facilitating a four-week study of Paul this summer) received three pretty positive reviews.
-------

Charles B. Cousar
An Introduction to the New Testament: Witnesses to God's New Work
Reviewed by Greg Carey

Edmondo Lupieri
A Commentary on the Apocalypse of John
Reviewed by Craig R. Koester

Peter Schäfer
Jesus in the Talmud
Reviewed by Catherine Hezser
Posted by Matthew Burgess at 7:10 PM No comments: