From Dove: Baker and Fortress Titles on Sale

For a limited time, selected titles are 20% off. Check them out here.
Posted by Matthew Burgess at 11:12 PM No comments:

From the last couple editions of the Review of Biblical Literature:

Paul Foster, ed.
The Writings of the Apostolic Fathers
Reviewed by Taras Khomych

Hans-Josef Klauck
Ancient Letters and the New Testament: A Guide to Context and Exegesis
Reviewed by Matthew D. Montonini

Nikolaos Lazaridis
Wisdom in Loose Form: The Language of Egyptian and Greek Proverbs in Collections of the Hellenistic and Roman Periods
Reviewed by John S. Kloppenborg

Peter M. Phillips
The Prologue to the Fourth Gospel: A Sequential Reading
Reviewed by John Painter

Christopher R. Seitz
Prophecy and Hermeneutics: Toward a New Introduction to the Prophets
Reviewed by Julia M. O'Brien

Hagith Sivan
Between Woman, Man and God: A New Interpretation of the Ten Commandments
Reviewed by William Marderness

Ben Witherington III
The Letters to Philemon, the Colossians, and the Ephesians: A Socio-Rhetorical Commentary on the Captivity Epistles
Reviewed by Timothy Gombis

Bob Becking
From David to Gedaliah: The Book of Kings as Story and History
Reviewed by Marvin A. Sweeney

Jason Beduhn and Paul Mirecki, eds.
Frontiers of Faith: The Christian Encounter with Manichaeism in the Acts of Archelaus
Reviewed by Tobias Nicklas

Deborah L. Ellens
Women in the Sex Texts of Leviticus and Deuteronomy: A Comparative Conceptual Analysis
Reviewed by Naomi Steinberg

David R. Nienhuis
Not by Paul Alone: The Formation of the Catholic Epistle Collection and the Christian Canon
Reviewed by Patrick J. Hartin

Matthew B. Schwartz and Kalman J. Kaplan
The Fruit of Her Hands: A Psychology of Biblical Woman
Reviewed by Corinne Blackmer

Vicki Flippin, This Is For You!

From the most recent edition of the UMC's Faith in Action newsletter... this really isn't just for Vicki (a particularly awesome classmate of mine from YDS). Any young clergy with some money left in their travel/professional development allotments should put this on their calendar!

Posted by Matthew Burgess at 6:26 PM No comments:

A few interesting titles to choose from here (particularly Epp's anthology of text-critical essays, although the steep price probably means that I'm going to be checking this one out of Alderman Library):

Because You Bear This Name: Conceptual Metaphor and the Moral Meaning of 1 Peter
Bonnie Howe

Because You Bear This Name argues that conceptual metaphor, grounded in embodied human experience, makes possible a shared moral discourse between the New Testament writers and readers today. The book has three foci: It explains why traditional understandings of metaphor are inadequate, introduces conceptual metaphor theory and methodology, and deploys those methods to analyze the cultural logic, moral content, and ethical implications of 1 Peter.

This volume contains a collection of fourteen essays applying the latest and neglected methods and offering new and innovative insight into the interpretation of the New Testament book Hebrews. Part 1 focuses on cultic language, concepts, and practice in Hebrews; part 2 on sociology, ethics, and rhetoric in Hebrews; and part 3 on textual-historical, comparative, and intertextual approaches to Hebrews. This volume will particularly appeal to students, teachers, and scholars interested in a variety of critical perspectives on Hebrews and on the New Testament’s third great theologian next to Paul and John. Moreover, the treatment of hermeneutical, cultic, sociological, and comparative matters in the context of biblical, Greco-Roman, and rabbinic literature will make this collection valuable to an even broader readership.

The present volume seeks to identify the underlying code of meanings about the Israelite king operating in various ways in texts and other artifacts surviving from the culture. The focus is upon the (living) body of the king, its anatomical characteristics, its constitution through ritual, and the conventions concerning its proper self-display by the king. Combining linguistic and historical-critical analysis of biblical and ancient Near Eastern texts, this book argues that the royal psalms contain a set of officially sanctioned notions about the royal body and its use. Other texts, often from circles outside the royal court, significantly altered these notions. The king’s body was thus for ancient Israelites the locus of reflection on power, gender, religion, and even international relations.

This collection of frequently cited articles and chapters published from 1962 to 2004 provides perspective on the history and development of New Testament textual criticism, with descriptions and critique of the major text-critical theories and methods. Specific manuscripts and text-types such as the Codex Bezae and the D-text are discussed, as well as issues such as anti-Judaic tendencies, the ascension narratives, and the relationship of text and canon. Many of the essays from the last fifteen years emphasize the earliest period and papyrus manuscripts, particularly those found at Oxyrhynchus, and assess their socio-cultural and intellectual contexts, while articles from the last five years advocate or engage the more controversial aspects of current New Testament textual criticism, especially the issue of “original text.”

The essays in this Festschrift honor James L. Kugel for his contribution to the field of biblical studies, in particular early biblical interpretation. The essays are organized in three roughly chronological categories. The first group treats some part of the Tanakh, ranging from the creation and Abraham stories of Genesis to the evolving conception of sacred writing in the prophetic literature. The second set of essays focuses chiefly on the literature of Second Temple Judaism, including Qumran and extrabiblical literature. The last group concerns the scriptural imagination at work in rabbinic literature, in Milton’s Paradise Lost, in the anti-Semitic work of Gerhard Kittel, up to the present in a treatment of Levinas and the Talmud.

Women in Ugarit and Israel: Their Social and Religious Position in the Context of the Ancient Near East
Hennie J. Marsman

In this volume the presupposition is investigated whether women in a polytheistic society had a better position than women in a monotheistic society. To this end the social and religious position of women in Ugarit according to its literary texts is compared to that of women in Israel according to the Hebrew Bible, while the wider context of the ancient Near East is also taken into consideration. After an overview of feminist biblical exegesis, the book discusses the roles of women in the family and in society. It also provides an analysis of the roles of women as religious specialists and as worshippers. Finally, the data on the position of women in the literary texts is compared to that in non-literary texts.

Posted by Matthew Burgess at 6:03 PM No comments:

New from Routledge/Talyor & Francis: Encyclopedia of the Historical Jesus

Courtesy of Dove Booksellers, who are currently offering this title at a slight discount (although at these prices, I will be holding out for the paperback version, despite the fact that this is one of my absolute favorite subjects): 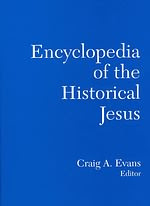 This Encyclopedia brings together the vast array of historical research into the reality of the man, the teachings, the acts, and the events ascribed to him that have served as the foundational story of one of the world's central religions. This kind of historiography is not biography. The historical study of the Jesus stories and the transmission of these stories through time have been of seminal importance to historians of religion. Critical historical examination has provided a way for scholars of Christianity for centuries to analyze the roots of legend and religion in a way that allows scholars an escape from the confines of dogma, belief, and theological interpretation. In recent years, historical Jesus studies have opened up important discussions concerning anti-Semitism and early Christianity and the political and ideological filtering of the Jesus story of early Christianity through the Roman empire and beyond.

Entries will cover the classical studies that initiated the new historiography, the theoretical discussions about authenticating the historical record, the examination of sources that have led to the western understanding of Jesus' teachings and disseminated myth of the events concerning Jesus' birth and death.

Posted by Matthew Burgess at 5:51 PM No comments: