Is a Jordanian Cave the Oldest Extant Christian Church?

According to a group of excavators, the answer to the above question is "yes." A recently discovered cave beneath a third-century church may have been used by early followers of Jesus between the time of his crucifixion and that of the destruction of Jerusalem by Roman forces in 70 CE. If such an assertion were to be confirmed, the cave would stand as the earliest extant Christian place of worship, easily displacing the third-century house church of Dura Europos uncovered by Yale researchers in the 1930s. Not surprisingly, Herschel Shanks, the feisty editor of Biblical Archaeology Review, has already questioned these claims, and he will certainly not be the last to do so. Nevertheless, BAR has helpfully compiled a number of news agencies' reports of the discovery, as well as images of the excavation site and other information, which may be viewed here. 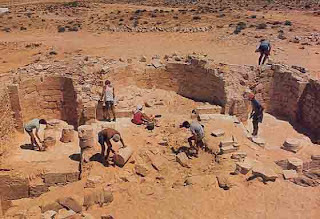 Posted by Matthew Burgess at 5:28 PM No comments:

Dove Booksellers is currently offering significant discounts on a number of New Testament and other related titles from Routledge/Taylor & Francis. Most of these are still slightly beyond my preferred price range, but those with deeper pocketbooks should certainly take a look here.

A recent announcement from the SBL:

The Society of Biblical Literature, in partnership with the Centro de Estudios de Historia del Antiguo Oriente, Universidad Católica Argentina (CEHAO/UCA), announces the establishment of a new online, open-access monograph series. The focus of the series will be on the ancient Near East, including ancient Israel and its literature, from the early Neolithic to the early Hellenistic eras. Proposals and manuscripts may be submitted in either Spanish or English. Manuscripts are subject to blind peer review by two members of the series’ editorial board before acceptance. Published volumes will be held to the high scholarly standards of SBL and CEHAO/UCA.

A prestigious international group of scholars has agreed to serve on the editorial board:

The partnership between SBL and CEHAO/UCA was initiated under the auspices of SBL’s International Cooperation Initiative (ICI) and represents the type of international scholarly exchange that is the goal of ICI. Scholars from anywhere in the world are invited to submit proposals, and the online nature of the series will provide global access to the published scholarship.

Questions about the series or proposals for volumes should be directed to Ehud Ben Zvi (ehud.ben.zvi@ualberta.ca), Roxana Flammini (roxflamm@yahoo.com.ar), or Billie Jean Collins (billie.collins@sbl-site.org).

Posted by Matthew Burgess at 4:03 PM No comments: