The Ossuary of James... Bleh

James Tabor notes that he is still receiving questions regarding the ossuary which purportedly bears an ancient inscription reading "James, son of Joseph, brother of Jesus." In a noble attempt to clear the considerably muddied waters, he provides links to Joseph Fitzmyer's essay on the subject, as well as the report of a "Conference on Forgery" which met in Jerusalem in January 2007.

I'm sure that this matter is incredibly compelling to some, but not to me. The bitter debates between Hershel Shanks (editor of Biblical Archaeology Review) and the Israel Antiquities Authority--which often seemed to be driven by personal interests rather than objective scholarship--became especially wearisome. Moreover, I'm not entirely convinced of the stakes accompanying the controversy. The book which Shanks co-wrote with Ben Witherington shortly after the discovery proclaims that the ossuary is "the first archaeological link to Jesus and his family." But if I may be blunt, so what? Only the most radical or the most naive scholars would deny Jesus' existence, given the relatively large amount of extant testimony from both Christian and non-Christian sources. Even if it is authentic, the ossuary can make only four firm contributions to the historical record:

1) Both Jesus and James actually lived.
2) Jesus and James were brothers.
3) At some point, James died and was buried.
4) The early Christian community (to which James and those who buried him belonged) retained some Jewish practices.

Again, none of these facts--with the possible exception of the second, which is still occasionally challenged by Roman Catholic scholars--were seriously disputed prior to the recent discovery. So while I'm excited by the potentiality of a tangible link to Jesus of Nazareth, I'm not sure how much it adds to our understanding of Jesus and his world.
Posted by Matthew Burgess at 5:01 PM 1 comment:

Goodman on Rome and Jerusalem

I found this in my e-mail inbox this morning:

As those ridiculous commercials for monster truck rallies at the fairgrounds used to say, "Be there! If you're at work... get off! If you're in jail, break out!" ;-)
Posted by Matthew Burgess at 3:59 PM 1 comment:

YDS has announced that a memorial service for Letty Russell (who passed away July 12) will be held in Marquand Chapel on October 23 at 5:30. Thanks to Yale ITS, the service will also be broadcast online.

Prof. Russell's full obituary may be viewed here. She was truly an inspiration to generations of scholars, students, and practitioners of Christianity.
Posted by Matthew Burgess at 3:35 PM No comments:

The title says it all. Check out his interview with Brandon Wason here, and his blog (an excellent point of entry into the world of the New Testament) here.
Posted by Matthew Burgess at 8:48 PM No comments:

Stone Age Artists
Five-to-eight-thousand-year-old rock carvings in western Egypt were made by shepherds, according to Polish investigators.

Temple Mount Bridge Approved
After much controversy, Jerusalem city officials have agreed on a plan to replace a damaged walkway to the Mount; the design, which still awaits final approval from the Interior Ministry, calls for a much smaller structure than previously proposed.

Tomb Threat?
Protesters in Iran claim that a new dam will cause indirect damage to the tomb of Cyrus the Great.

That’s Fine in Practice but Will It Hold Up in Theory?
A Harvard researcher has found that the ancients were capable of building complex machines long before they understood the mathematics behind them.

Waiting for the Big One
A Tel Aviv University seismologist says historical records of earthquakes in the past indicate that the area on the Dead Sea Fault, including Jerusalem and Amman, Jordan, is overdue for a major tremor.

How the Pyramids Were Built
A Czech researcher has made a specialty of studying the tools used by the ancient Egyptians.
Posted by Matthew Burgess at 8:03 PM No comments:

Richard Cassidy
Four Times Peter: Portrayals of Peter in the Four Gospels and at Philippi
Reviewed by Timothy Wiarda

Jürgen Zangenberg and Michael Labahn, editors
Christians as a Religious Minority in a Multicultural City: Modes of Interaction and Identity Formation in Early Imperial Rome
Reviewed by Jonathan Reed
Posted by Matthew Burgess at 7:55 PM No comments:

Jesus and His Siblings

Although my "Sibling Rivalries" course is primarily concerned with the occurrences of this phenomenon in the Hebrew Bible, I always have to be unique (read: difficult)... and so my term paper will analyze narrative and exegetical perspectives on the relationship between Jesus of Nazareth and his siblings. An abstract and an initial bibliography are available here. If anyone has any brilliant insights or additions, send them my way. If anyone doesn't like this topic, keep it to yourself. ;-)

And, providentially, Tony Chartrand-Burke has just posted his own missive on the family of Jesus, which he is currently covering in his "New Testament Apocrypha" course. Check it out.
Posted by Matthew Burgess at 8:57 PM No comments:

If you're anywhere near New Haven on Friday afternoon, be sure not to miss this:

Sean Freyne
Emeritus Professor of Theology at Trinity College, Dublin and Visiting Professor of New Testament at Harvard Divinity School
"Josephan Perspectives on the Galilean Social World: Some Reconsiderations"
Friday, October 19, Yale Divinity School
The lecture, free and open to the public, will begin at 12.15 p.m. in Latourette Hall.

Freyne has conducted significant research on the Synoptic Gospels, most recently in the context of ancient biography and its social roles. He has contributed numerous articles and papers on the current 'third wave' of historical Jesus studies. Freyne's publication Jesus: A Jewish Galilean (2004) gathers together many of his ideas on both Jesus and Galilee developed over the years.

See you on Friday!
Posted by Matthew Burgess at 8:14 PM No comments:

New from Pickwick Publications
An Imprint of Wipf and Stock Publishers 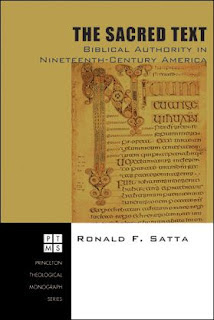 “Ronald Satta provides a careful and lucid defense of a position I had thought to be mistaken until his research persuaded me otherwise.”
—Edward Wierenga, University of Rochester 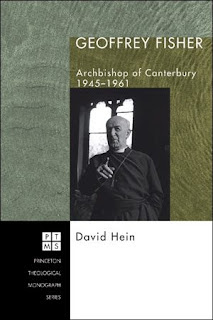 David Hein is Professor of Religion and Philosophy at Hood College and coauthor of The Episcopalians.